Do CBD and THC impact your ability to drive safely? A new study hopes to offer some answers. Researchers found that using CBD does not impair driving, and that the effects of moderate amounts of THC are mild 40 minutes after use and have no impact at all after four hours.

The study, published in the Journal of the American Medical Association, involved a small group of 26 test subjects. Researchers from the Lambert Initiative for Cannabinoid Therapeutics at the University of Sydney and Maastricht University in the Netherlands worked together on the report.

The researchers hope their findings can provide a foundation for evidence-based laws around driving and the use of cannabis products. It’s a situation that has vexed law enforcement who use tests that may show past cannabis use but do not necessarily mean the driver is currently impaired.

The findings also could prove significant for those who take CBD for medicinal reasons.

“These findings indicate for the first time that CBD, when given without THC, does not affect a subject’s ability to drive,” lead study author Dr. Thomas Arkell said. “That’s great news for those using or considering treatment using CBD-based products.”

CBD use has skyrocketed in the United States and around the world. Taken from the cannabis plant, CBD (cannabidiol) is not psychoactive and does not give users a “high.” As noted by the researchers, CBD has also seen “substantial growth” in medical treatment in Australia and many other countries.

Uses for products with CBD include treating conditions such as epilepsy, anxiety, chronic pain, and addictions. Some products also mix both CBD and THC, the chemical component in marijuana that causes the high.

Arkell said this had led law enforcement around the world to grapple with handling the issue of cannabis-impaired driving. “These results provide much-needed insights into the magnitude and duration of impairment caused by different types of cannabis and can help to guide road-safety policy not just in Australia but around the world,” Arkell said.

To determine the impairment level for drivers, researchers gave test subjects CBD and THC and put them behind the wheel. Researchers conducted the tests at Maastricht University. The study participants, 26 healthy people, used four different types of cannabis in random order. They then went on the road for a 100-kilometer drive on a public highway in a dual control car with a driving instructor.

Researchers used a test that measured the standard deviation of vehicle position, including lane weaving, swerving, and overcorrecting. It’s a proven, frequently used study. Drivers who consume alcohol and drugs such as Valium typically show an increase in deviation. Participants drove twice: Forty minutes after inhaling vaporized CBD or THC, then again after four hours. The researcher reported that they administered enough THC for participants to feel strong intoxication.

The Academic Director of the Lambert Initiative, Professor Iain McGregor, said in the news release that the results “should reassure people using CBD-only products that they are most likely safe to drive while helping patients using THC-dominant products to understand the duration of impairment.”

The Lambert is engaged in ongoing research beyond the current study, including a study into the impact of cannabis on insomnia. 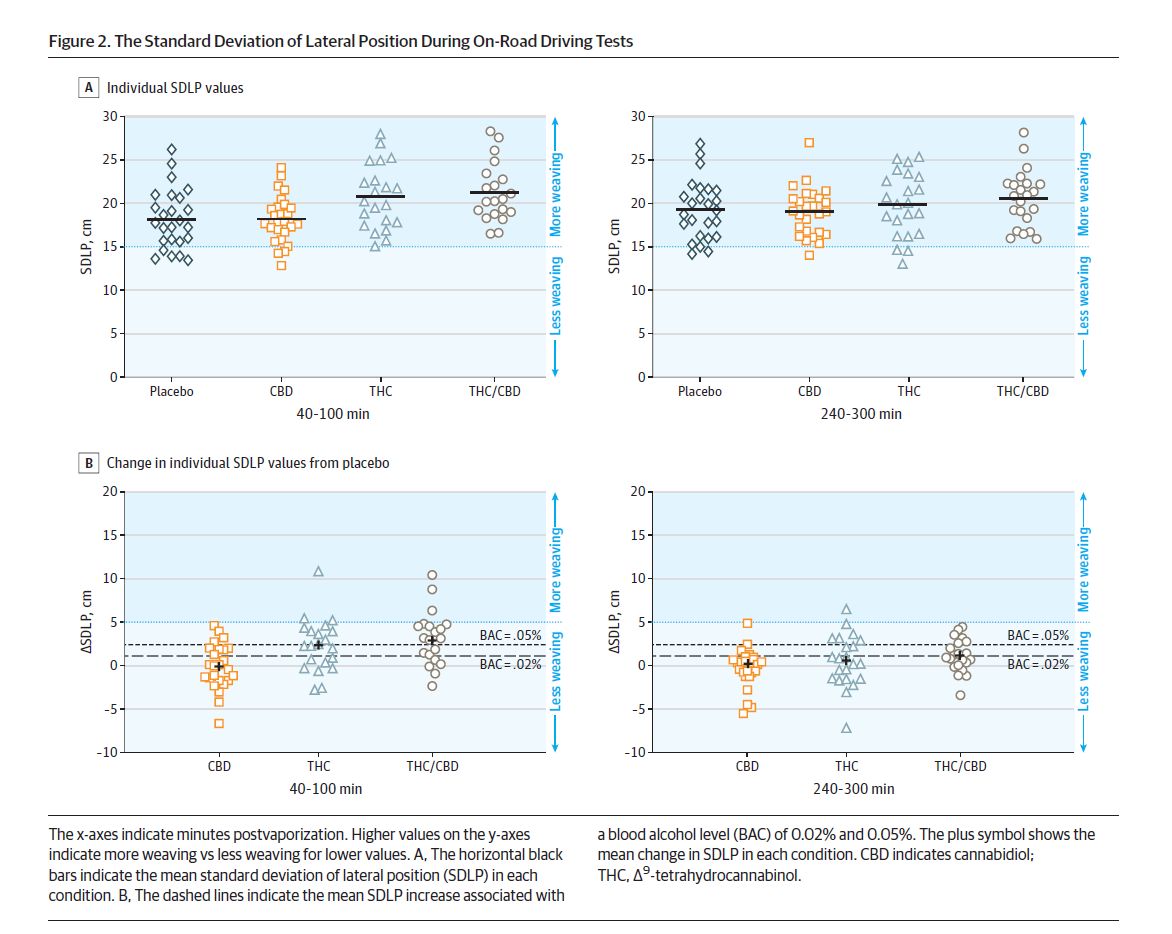