The Endocannabinoid System. Your body’s natural network of systems and processes that controls numerous functions is a marvel. It responds to internal and external signals to help manage processes and keep us healthy. Ok, we might have jumped in a bit too deep too fast, let’s take a step back and tell you all about the ECS and why we care here at HED Carts!

The Endocannabinoid System - What Is It Good For?

First, What is the Endocannabinoid System (ECS)

Uh… what? Ok we can simplify this a bit we think.

Let’s break that down a bit.

The receptors are throughout the central and peripheral nervous systems, and they help the function of those systems. The endocannabinoids bind to the receptors, essentially powering them up.

The endocannabinoid system primarily works with neuronal synaptic communication – that is to say, they way systems in your body communicate, and affects biological functions. Eating, anxiety, metabolism, even learning and memory and reproduction are all affected.

Ok, that’s still a lot of science jargon so let’s dial it in a bit to focus on just two key pieces of the ECS and the things they directly affect.

There are two main kinds of cannabinoid receptors in your ECS - CB1 and CB2. Understanding what they are responsible for and where they’re found can help you understand the whole ECS thing.

CB2 receptors are located in other organs, especially those that work with the immune system. These receptors are in the bone, cardiovascular system, the central nervous system, kidneys, immune system, skin, liver, pancreas, gut health, reproductive system and others.

So, what do these receptors do? They receive the cannabinoids and promote healthier function in the systems they are attached to.

Think of the ECS like a car, and the endocannabinoids are like the oil. Without them you may still run, but after a while you’ll be running suboptimally. By keeping the oil topped off (the cannabinoids) and your ECS primed you can ensure everything runs smoothly. 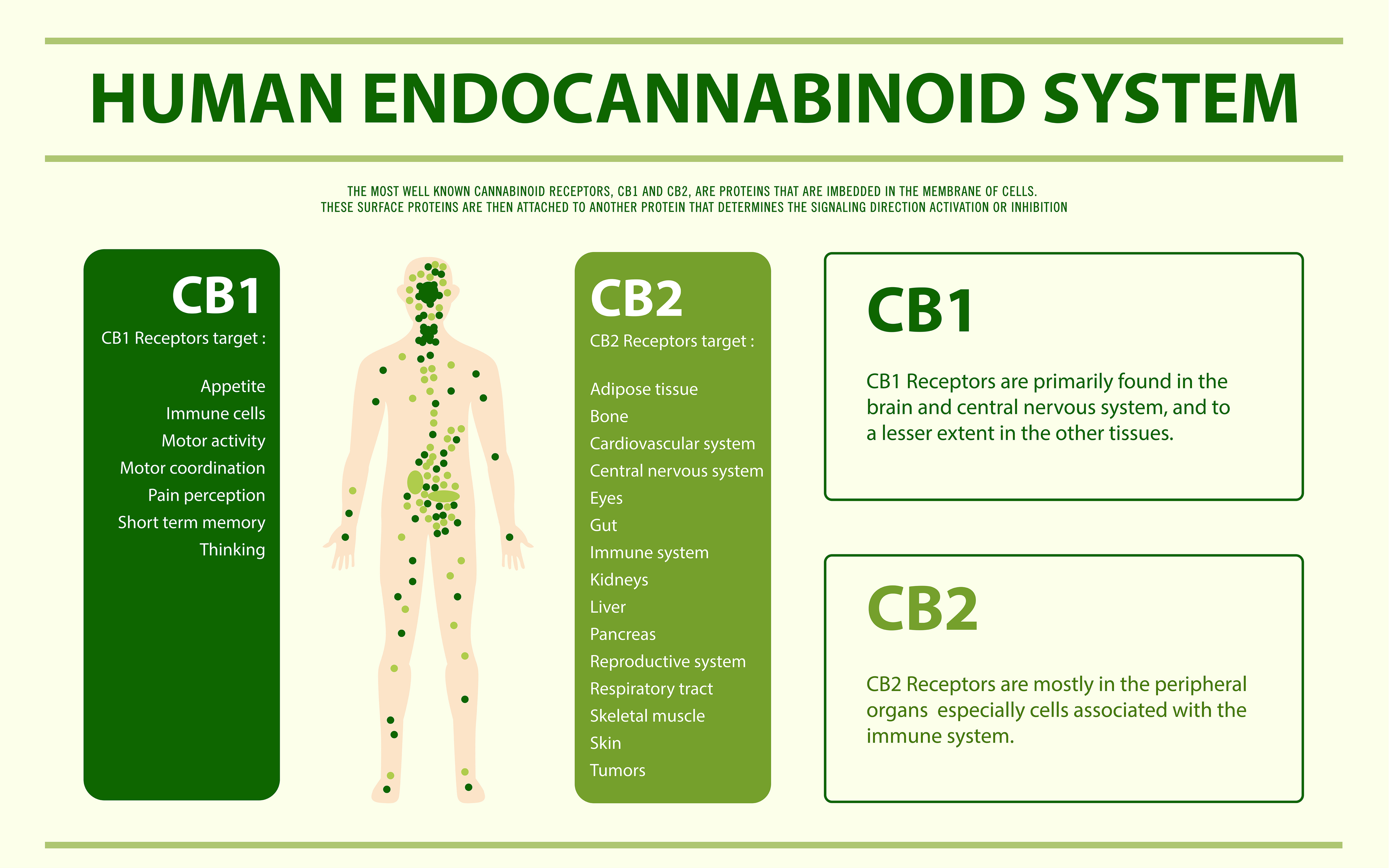 Where to Get Cannabinoids

Tetrahydrocannabinol and cannabidiol are two of the most recognized types derived from cannabis, though you probably recognize them from their abbreviations THC and CBD respectively.

If you want to get really deep into it there are a ton of studies to check out, but for us we’ll try and keep it simple.

When you ingest your THC or CBD, whether through dabs, vaping, or taking a supplement, you’re giving your body the extra fuel it needs for the ECS to operate optimally, regulating hormones, hunger, appetite, inflammation, and all sort of

Since cannabinoids are a benefit to the body, you want to make sure you’re using only the highest quality supplies and tools in your method of supplementing. That means, if you’re vaping, you want cartridges that pass a rigorous heavy metals policy like those offered here at High End Dabzation Carts.